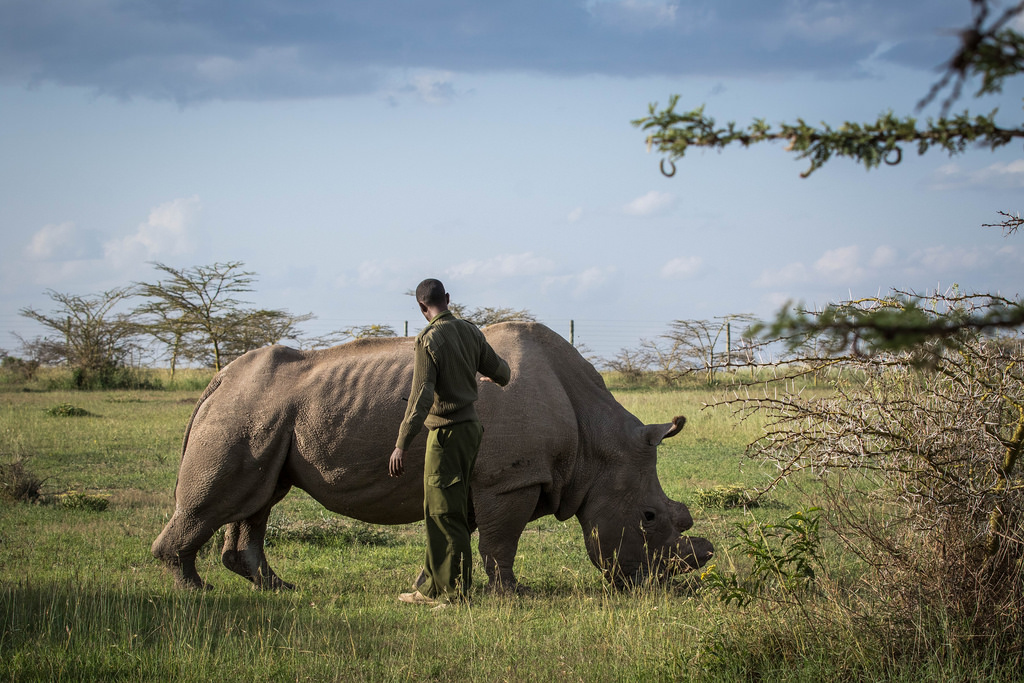 Now at the incredibly advanced age of 45 years, the last male northern white rhino, Sudan, is being very carefully looked after at the Ol Pejeta Conservancy in Kenya. There, under armed guard 24/7, this rhino has private living quarters with an attendant charged with making him comfortable and safe, alongside daily check-ups. He is being looked after along with the last two females of his species, Naijin and her daughter Fatu. Sudan is not permitted to be with them because in his old age, these two strong females are a threat to him. Despite the royal treatment he receives, Sudan’s story and that of his species is a tragic one.

Sudan was born in 1973 in South Sudan in Ol Pejeta. At the age of two, he was captured by animal catchers and taken to a zoo in old Czechoslovakia, where he would spend the next 34 years of his life. The zookeepers treated him and his companions well, but slowly, the captured white rhinos’ natural instincts vanished. When presented with a female rhino, Sudan and his companions seemed at a loss for what to do. The zookeepers had to show and help them mate. Although Sudan eventually sired calves, the 17 rhinos in the zoo only managed to produce three young in 20 years.

Seeing the dire situation of this subspecies of rhinos, a decision was made in 2009 to bring the four rhinos in the Czech zoo back to Africa. Two males, Suni and Sudan, and two females, Naijin and Fatu, were repatriated to Africa. Still, the species faced more adversity. In 2014, the male Suni died of a heart attack. It was also soon discovered that both females cannot reproduce naturally due to the prolonged captivity they had faced. In addition, Sudan is now too old to mate with either of the females.

Facing this critical situation, researchers are working against the clock to attempt to save the species through in vitro fertilization. Their plan seems simple enough: they want to attempt to get some eggs from the ovaries of Naijin and Fatu, fertilize them with some cryogenically stored sperm from three dead northern white rhinos and from Sudan, and plant the embryos in the closely related southern white rhinos, thus yielding a new generation of northern white rhinos. Yet, in vitro fertilization is challenging in big animals like rhinos: not only has it never been done for any species of rhinoceros, but the ovaries in both females are difficult to locate.

The researchers will be as careful as possible, and if complications arise, such a procedure will be interrupted to not put at risk Naijin’s or Fatu’s lives. They will not be allowed to operate on the northern white rhinos until they can prove the procedure’s efficiency, but practice operations on southern white rhinos have only met partial success. The pressure is on for rhino conservationists around the world, especially since Sudan developed a secondary infection on his back leg a few months ago, and treatment seems to be having no effect.

The northern white rhino took millions of years to evolve, but has come to the verge of extinction in only five decades. As the Nature documentary “The Last Rhino” put it, “Sudan will continue to be cared for at Ol Pejeta Conservancy until the end of his life. But his story will live on as a cautionary tale, reminding us that, while we have the power to drive whole species to the brink of extinction, we may not have the power to bring them back.”