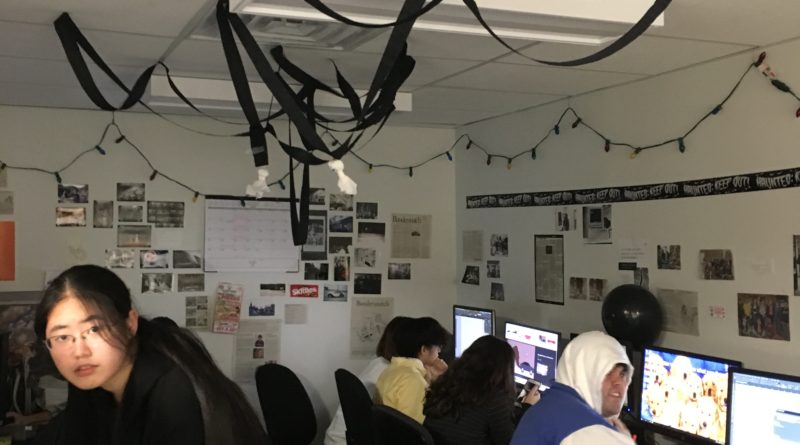 “And whatever you do, don’t decorate the club room” Kylie said, her backpack slung over her shoulder and her hand impatiently holding the door.

She nodded and closed it before dashing off to her first class. Once she was gone, I looked down to my open backpack and the ten dollar’s worth of Dollarama Halloween decorations. I didn’t have a job, so those ten bucks were more important than they seemed.

I then looked up and around the Bandersnatch club room. I was alone. Though the walls were mostly covered in newspaper clippings and memes, I could only focus on the empty spaces.

‘It’s not my fault I’m a festive guy, why shouldn’t others feel the Halloween spook?’

I didn’t want to anger Kylie, but I saw no harm in livening up the place.

‘Then again, she’s a good friend and she’s sort of in charge of the place.’

I looked to the white board for guidance and found a detailed drawing of Squidward with a quote next to him:

“If you round your edges, you’ll lose your edge.”
I wasn’t quite sure what that meant, but I decided it was a sign to go ahead.

I first reached into the bag and took out a bunch of fake spider webs, the floofy kind often seen at cheap haunted houses.

A low, ethereal voice asked from behind me, making me instantly jump and turn in surprise. There was no one there.

‘No, but I might be going insane.’
I told myself. I was a huge fan of horror movies, games and manga, but I’ve never ever believed in ghosts. A crazy person hearing voices in his head was plausible though.

I agreed with the voice, so I put down the spider webs and got to plastering the walls with yellow “WATCH OUT” and black “ENTER IF YOU DARE” tape.

“Cover the front of the door, not the back, you idiot.”

The same voice appeared, but this time it was accompanied by a tall translucent figure hovering slightly behind me. At that point, I was convinced it was there, so I tried to remember if I had taken any drugs the night before.

The ghost was male and dressed in a way that would be casual in the 70s but formal nowadays. His eyes were sunken and green, his short brown hair waving as if stuck underwater.

‘And I’m insane.’ I thought, but that didn’t make him disappear.

“You know, normally I just scare the sh*t out of people so they don’t decorate, but I can sense your Halloween spirit. Spook on, dude, just let me help.”
“Alright,” I said out loud, worried I might be talking to thin air. “But first tell me why you’re haunting the Bandersnatch club room.”

Spooky Luke nodded, crossed his arms and sat in midair.

“Okay. So I was really into Halloween, like you, because my parents wouldn’t let me go trick-or-treating, so I decided to celebrate here by decorating the room. The problem is, because I wasn’t confident and I wanted it to be a surprise, I did it all by myself. When I went to hang a ghost from the ceiling, I used one of the chairs, and it slid from under me, so I fell and broke my neck.”

He pointed to the side of his neck, even though there wasn’t any scar or wound.

“You sure you didn’t die of fright?”

I joked, suddenly comfortable with hanging out with the ghost of the club room.

“No. It was just humiliating. When others tried to decorate the place, I got jealous and stopped them. That’s why none of the Office Managers let anyone hang Halloween decorations anymore.”

As he continued talking I placed some skeletons around the computers and placed a fake pumpkin on one of the desks. I started thinking about the sad fate of Spooky Luke and then wondered about his ghostly presence.

“So if ghosts are real, are there any others here?”

He looked up while trying to remember, then eyed my placement of the haunted portraits suspiciously.

“Well I don’t know any of them personally, but I know one likes to hang out in the photography dark room. Then there’s the one in the Hochelaga basement…and the one in Hochelaga first floor…oh! And the one in the third floor of Hochelaga. There’s also that thing in the depths of Casgrain but it’s not really a ghost.”

“Any I should be scared of?”

I nodded and placed the last of the decorations.

Spooky Luke proclaimed, then nodded at me. It felt strange to be validated by a ghost, but I abandoned the realm of reality when I started hearing voices.

Suddenly, he looked behind him with his hands out, as if the ground shook beneath him.

He quickly vanished, leaving me once again alone. Before I could sit back down, I heard the door open and Kylie come back into the room.

“So it turns out my class was canceled and I-“

She instantly froze and went white as a sheet at the sight of the Halloween-themed club room.

“You look like you’ve seen a ghost. Can you help me hang this one from the ceiling?”