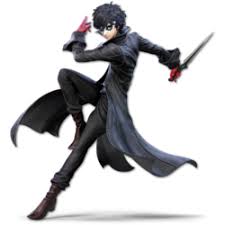 Joker from Persona 5 has stolen the show! Although he is not immediately more powerful than the majority of the roster like Cloud or Bayonetta were at their release in Smash 4, he has interesting and useful tools at his disposal that put him closer to the top of the tier list.
To begin with, his long-range projectiles (Gun and Eiha, his Neutral-Special and Side-Special respectively) allow him to safely do damage at a distance, since he is neither bulky nor physically strong. The bullets from his gun also don’t technically count as a projectile in-game, meaning they can’t be reflected! When it comes to recovery, his Grappling Hook (Up-Special) is the best tether in the game. This move becomes Wings of Redemption (the recovery move with the most distance in the game) when Arsene is active.
Arsene is Joker’s Persona, which manifests when his Rebellion Gauge is full and disappears when it’s depleted. Arsene not only makes his physical and projectile moves more powerful, but also changes his Down-Special so it becomes both a counter and a reflector. Without Arsene, this move (Rebel Guard) ‘blocks’ all attacks by making Joker stay still, no matter how strong the attack that hit him is. He still takes some damage, but in exchange this fills up the Rebellion Gauge quicker. This is a tricky move that requires some practice to use properly.
Joker’s playstyle is similar to that of Sheik or Cloud, poking with projectiles and quick moves to provoke a mistake from your opponent, then dashing in for combos that do significant damage. His place in the tier list is not yet clearly-defined, but I would recommend using him if you already enjoy playing technical characters like Sheik or Bayonetta.