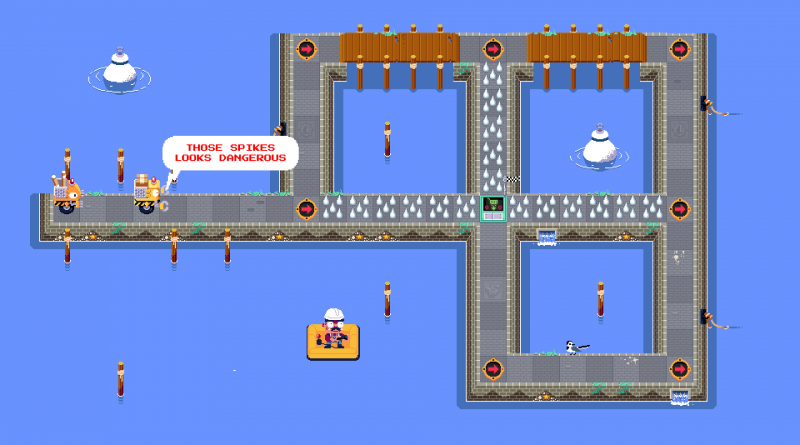 Damaged In Transit is an isometric puzzle game that makes my brain melt, and I love it.

The goal of the game centers around navigating two cute little drones to exit depots on the map as they need to deliver packages to their clientele. However, this task is quite difficult as numerous obstacles will get in the way of your drones and their packaged goods. One hit from spikes or falling into the ocean will cause your little buddies to perish instantly.

Packaged into bitesize levels, your robot will have to make it from point A to point B with perfect precision. The robots will move in one single direction until they touch little arrow pads on their track which you can control. The placement of your bots will vary from level to level, and so will the layouts. They can be placed behind each other or sometimes at distant points across the map. If you lose either of the drones you will have to start the level over so it is important to have a constant eye on their location to avoid crashing into hazards.

Overall, Damaged In Transit can be quite difficult at times. Maybe I’m bad at multitasking, but I always find it really difficult to keep my eyes on what’s going on. Sometimes, it feels like I’m having a brain aneurysm, and my higher cognitive functions cease to work. It can be a little complicated at times. That doesn’t mean the game is unforgiving. Luckily there isn’t a life system and the game saves after every level. Also, there is a difficulty setting which allows you to slow down or even speed up the movement of your drones. I ended up sticking to the default speed since I found that making my robots move slowly messed up my rhythm, and going to fast was to hard for my casual caveman brain.

For what it is, Damaged In Transit is a fun puzzler with cute pixel art. Even with the frustration that comes with trial and error, and the feeling that the developers are secretly watching me play and enjoying every moment I mess up, mocking my cognitive ability, beating a level is incredibly satisfying.