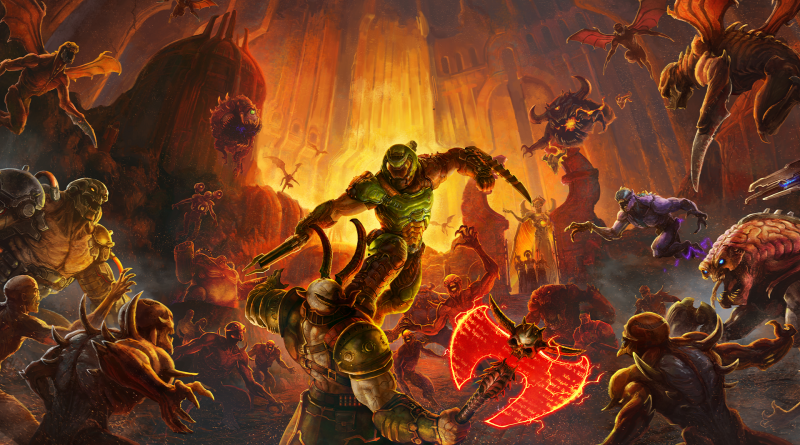 Back in 2016, I missed my chance to play DOOM (2016). Although not original in name, it was praised for bringing the series back into full swing. The combat, graphics and soundtrack were all stellar achievements by the development team. Both critics and audience alike were impressed by IDSoftware’s masterpiece after the series had been dormant for years. While I didn’t play 2016, I didn’t miss my chance for its recently released sequel, DOOM Eternal.

The platforming is quite fun and Doomguy is capable of many parkour abilities. He can climb walls, run extremely fast, double jump and dash in the air. His movement is very satisfying and traversing the levels by jumping from building to building is quite exhilarating. The combat is also incredible. While overwhelming at first, the shooting mechanics offers a wide variety of styles and weapons to choose from. Doomguy is essentially a glass tank – a macho muscular soldier stripped right out of 80’s action flicks and equipped to the brim with weapons of mass destruction he could probably outgun the US military with – that goes down in a few hits if not careful. Most combat encounters happen in small arena areas within the levels where the player must destroy all demons by any means necessary. However, going in guns blazing will only get you so far. Dodging and telegraphing enemy attacks is the name of the game. The player will also need to learn how to trigger special execution kills to replenish health and use Doomguy’s chainsaw to regain ammo as there are not that many health kits and ammo packs lying around. It’s a risk/reward system the player needs to adapt to if they want to have a chance at surviving encounters. Overall, you definitely feel like you’re controlling a one-man army.

Exploration is also a big part of the game. Each map is filled to the brim with little collectables which will upgrade Doomguy’s arsenal, health and combat abilities. Neat little extras such as cosmetic skins or codex entries are also spruced throughout levels. The developers decided to expand the universe of Doom with the reboot series and there is a surprising amount of lore to learn about  such as the covenants of hell as well as the origins of Doomguy and why he is such a vengeful being of chaos.

While I do enjoy the almost collectathon spirit of the game, I do think the level layouts tend to be too big. Its really easy to get lost, and a lot of the environments can look the same at times. I spent half the game looking at the map screen that’s only accessible when you enter the pause menu. A mini map would have been incredibly useful, or smaller levels would have helped facilitate this issue. I’m also disappointed by the lack of different level environments. Most missions take place in ransacked cities and while they look nice at first, they get very repetitive for a 15-hour campaign. There are neat missions that take place outside cityscapes such as one in this ancient abandoned Asgardian like citadel, but they are few and far between.

The biggest flaw of this game would be the UI. It is simply awful. If there is one thing, I wished the developers would have put more time into, it would be the game’s HUD. A lot of the UI is too small to be correctly seen and sometimes I wouldn’t notice I was low on ammo or health until I died.  It’s frustrating and ruins the experience.

Nevertheless, DOOM Eternal is a fun game even if parts of it could have spent more time in the oven or gone back to the drawing board. If students are looking for a good time sinker in these times of isolation, I think this game could be a fine distraction.