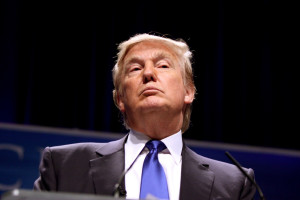 What Does Canada Have to do When Faced With a Donald Trump Victory?

Last week, I had the privilege of watching the 2016 U.S. presidential election unfold as an outsider, with the comfort of knowing that regardless of the outcome, I would be minimally affected. After all, the President of the United States of America is not my head of state. This was, of course, before Donald Trump was elected. It would be naive of me to say that his election will not affect us all; or that it will not have implications for the entire world. Yet, there is little I can do as someone who is not an American citizen. Throughout the United States, people are refusing to accept Trump as their President by protesting in the streets, and I support their efforts. They are merely exercising their right to freedom of speech by telling Trump that they do not want him to lead their country. But Trump isn’t listening; he has managed to delude himself into thinking that the people chose him. He is ignoring the people, and if he isn’t listening to his own people, then what reason would he have to listen to us, his neighbours?

Faced with the outcome of the election, and an inability to do much to change it, I am now going to turn my focus to my own country. Canadians are proud of the fact that they are not American, but we cannot allow our feelings of superiority to blind us, which is something I feel happens far too often. The problems that are present in America are also present in Canada; the people share the same anger. Donald Trump was elected president because of the use of hateful rhetoric that promised deceptively simple solutions to the problems the American people are currently faced with. This deception has been successful enough that a dishonest, ignorant, and inexperienced man was elected to the most important position in the country. Canadians, too, are susceptible to such deception. Indeed, the entire world is. Donald Trump, and his politics are not unique, but rather part of a growing movement of nationalism that is occurring in the West in reaction to these uncertain times. I fear such politics are gaining a foothold in Canada.

A little more than a year ago, Canadians made the choice to elect a leader that promotes openness and progressiveness. In doing so, I believe we made a step in the right direction, but as I said before, we must not allow ourselves to feel superior to others. We too, face many problems and challenges, and must focus on improving our own country, for it could be better still. In response to the results of the 2016 U.S. presidential election, the only thing we can do is to strive to be more open, more welcoming than we have been in the past, and to reject policies that diminish our freedoms, and the freedoms of others. In other words, we must choose what 52 million Americans, in electing Donald Trump, just rejected.