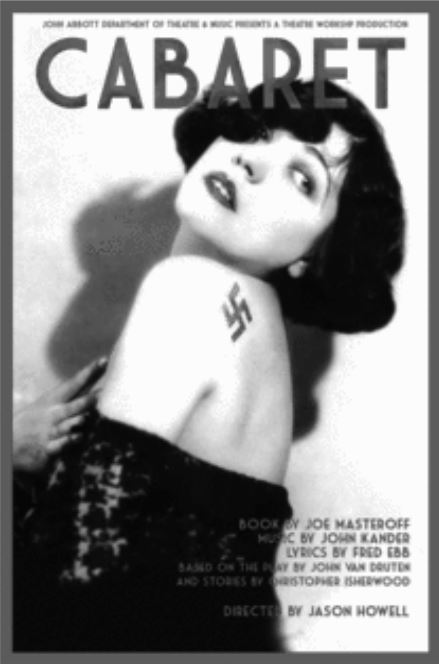 On March 26th, John Abbott will open the doors of the Casgrain theatre and invite you to step inside the Kit Kat Club to view the C.A.L.L. Theatre Workshop production of Cabaret, directed by Jason Howell. Young author Cliff Bradshaw travels from Pennsylvania, USA to Berlin, Germany to seek inspiration for his novel.

On the train, he meets Ernst Ludwig, who introduces him to the decadence and outrageousness of the Kit Kat Club. There he meets performer Sally Bowles, who flips his life upside down by moving in with him.

Along the way we meet Cliff ’s landlady Fraulein Schneider, her love interest Herr Schultz, Fraulein Kost, who loves her sailors, and, of course, the irresistible performers of the Kit Kat Club led by the cheeky, satirical Emcee.

Cliff soon becomes accustomed to his wild life of clubs and parties as well as his new romance with Sally.

However, when the ominous shadow of the Nazis begins to be felt by our characters, can they keep up their extravagant ways? Will Fraulein Schneider take a leap of faith and marry the Jewish man across the hall? Can Cliff keep his world together?

Find out from March 26th to April 4th in the Casgrain theatre. For tickets, go to brownpapertickets.com.

Tickets are $8 for students/seniors and $13 for the general public.

Caution: This show contains mature themes and sexual content, and therefore is not advisable for children.