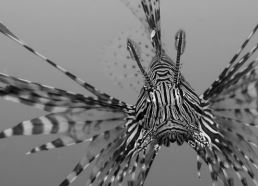 This winter break, I had the wonderful opportunity to go to Belize, Central America, as part of the Biological Marine Science option course offered at John Abbott College. This course offers hands-on experience working in the field, something science students often lose sight of in the midst of all the theory we need to learn. What better than two weeks in paradise to understand the real-world applications of science? Calabash Caye Field Station, run by the University of Belize, was our home for a week, and was our base camp as we set off to explore and survey the diversity of marine life throughout Turneffe Atoll.

The Belizean coral reef system was the perfect place to learn about biodiversity and the relationships that exist between tropical marine species. The lionfish, for instance, is an invasive species whose uncontrollable appetite has a detrimental impact on the abundance of other coral reef inhabitants. These fish are eerily beautiful, but deadly. With 18 venomous spines, brushing up against one can produce what one of our boat captains described as an excruciating burn that turned his hand black. The only way to combat the pain of a lionfish sting is to submerge it in hot water in hopes of denaturing the toxic protein.

Although the urge to swim away from them as quickly as possible is immense, fears must be set aside for the greater good. Lionfish have a higher growth rate than most other species sharing their habitat, resulting in a higher reproductive rate. Add to this the fact that they will eat almost anything, consuming up to 30 times their stomach volume, and you have a dominant species capable of decimating rare or endangered species. There is a silent rule in Belize, and anywhere else in the Atlantic or Caribbean affected by this invasion: If you see a lionfish, kill it. With a spear.

This may sound cruel, but it is important to understand that this species is not in its natural environment, and that its exponential growth is a result of human error. How did this all start, exactly? The lionfish, native to the Indo-Pacific, is a popular aquarium fish because of its bright and dramatic appearance. Though it is difficult to pinpoint an exact time or place, it is believed that some domestic fish were released into the Atlantic somewhere along the coast of Florida in the 1980s. From there, the species flourished without any predators, spreading along American coastlines before trickling down to the Caribbean as well as Central and South America.

Luckily, this species is slow to react when attacked and is therefore easy to kill. Lionfish also makes for delicious barbecue, and eating it is ecologically favorable to consuming overfished species like the grouper.

JAC students contributed to current lionfish invasion data bases by capturing and dissecting fish in order to measure them, weigh them, and evaluate their developmental stage as well as their stomach content.

Other projects included conducting surveys and identifying new species to add to the 4th edition of the student-produced field guide, Marine Life of the Caribbean Sea. For anyone interested in actively contributing to science and gaining field work experience, I would highly recommend this trip. Applications open next fall and this science option course will be offered in January 2016, during the intersession period.