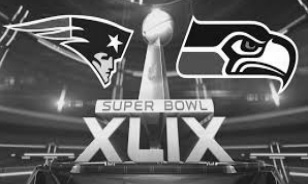 This Sunday marks the 49th annual Super Bowl which determines the champion of America’s most popular sports league, the NFL. It may not be your favorite sport, but American football is something that has made its way into your home one way or another. If it isn’t your dad dedicating a Sunday to watching men violently hit each other, it’s you watching the latest teeny bopper perform at the Super Bowl halftime show.

This year, the Super Bowl will be played in Arizona and will feature the New England Patriots and the defending champion, Seattle Seahawks. These two teams are arguably the most deserving teams to be in this year’s Super Bowl. They are truly the league’s best.

If you were to look at the Seattle Seahawks, you would see a team that excels on defense but that can dominate on the offensive side of the ball as well. The Seahawks’ secondary has built up quite a reputation the last three years. Richard Sherman is one of the leaders of that group and has even gone on to nickname them the “Legion of Boom” for their hard hitting, “take no prisoner” style. They have made life hell for opposing quarterbacks and Tom Brady will feel that on Sunday.

Russell Wilson on the other hand has developed into a great Quarterback who has been able to lead his Seahawks to back to back Super Bowl games. In only his third season in the league, Wilson has accomplished what many spend whole careers to achieve.

When it comes to the Patriots, this year’s Super Bowl will be filled with controversy over deflate-gate. In their AFC Championship game against the Indianapolis Colts, it was alleged that the Pats were deflating their footballs in order to give themselves an advantage when it came to throwing and catching the ball. This past week, coach Bill Belichick and quarterback Tom Brady were unconvincing when denying the allegations which in turn created even more suspicion.

Despite all of this, the New England Patriots have always been championship contenders since Tom Brady became quarterback over a decade ago. As of Sunday, Brady will have played in six Super Bowls and in the five that he has already played, he has won three. Another Super Bowl victory this Sunday would cement his place in history as one of the greatest quarterbacks to ever play the game. Brady isn’t the only player on the Pats though. The team as a whole has been great all year and will definitely be pumped to show Seattle that they aren’t a one man show.

With the two best teams in the league playing for the Lombardi trophy, Football fans everywhere can expect a great game. These teams are evenly matched and the game itself is impossible to predict. Despite any allegations, the Patriots and the Seahawks have earned their place in what will be an incredible spectacle of American sports.