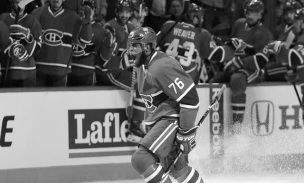 For the third season in a row, the Habs seem destined to make the playoffs. So far, it seems Marc Bergevin has done everything right, bringing life back into the organization. Ever since hiring a completely new coaching staff and management team, the players are having great success. With a record of 29 wins, 13 losses and 3 ties, they are good for 4th place in the eastern conference with 61 points this season.

You’d think that with such a decent record, they would be superior than most teams, but unfortunately, it is not the case. Looking at the roster from a management stand point, you certainly cannot say that the Habs are a contender for the Stanley cup.

The stats also seem to indicate the same thing. The Canadiens are 23rd place in “goals for” with only 118 and 21st in the power play department, which has been a problem for quite some time. The struggle to score goals has been in large part due to a lack of consistency amongst the forwards and defenders. Thankfully, Carey Price is on top of his game, offering stellar performances every night. This, along with solid defensive hockey from certain players, puts the Habs in 3rd place for goals against. The Penalty kill also remains solid as they sit in 5th place.

The offensive play of most of the forwards has been quite good. Even though their stats are not too impressive, the effort is always present. Max Pacioretty seems to be the one carrying the team on his back with his clutch goal scoring ability. Meanwhile, Alex Galchenyuk is still improving. He still lacks confidence, but his elite speed and game-breaking talent suggests that he truly is a superstar in the making. Brendan Gallagher is still playing with the same intensity, causing chaos for opposing defenders and helping create space for his teammates. Also, the addition of Manny Malhotra in the faceoff circle, the consistent defensive play of Tomas Plekanec and the grittiness provided by Dale Weise & Brandon Prust, shows that the system in place works. Michel Therrien and his staff have created a culture of respect and accountability around it.

On defense, it’s been a somewhat different story. After signing a lucrative contract in the off season, P.K. Subban’s play has been average at best. Luckily, he gets the points due to his smart offensive play, but his tendency to create turnovers has forced many people to question his hockey IQ. On the other hand, Andrei Markov is playing solid defensively. Even though his speed is on the decline, his stick work and positioning allows him to still be a threat. Unfortunately, Alexei Emelin has been abysmal throughout the season. At his peak he is solid as a top four defensemen, but when he’s not on his game, he doesn’t even belong in the NHL. Thankfully, Nathan Beaulieu and Sergei Gonchar have added stability on the back end by playing simple but effective hockey.