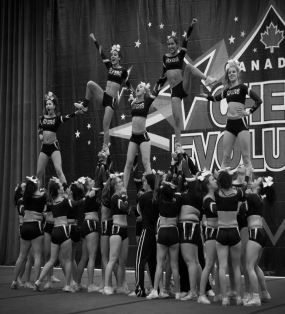 It is very popular for girls as well as guys, and it isn’t as easy as you think. You have different elements, such as the baskets, stunts, and a pyramid, that consists of 1, 2, 3, or 4 bases lifting a girl in the air while she performs difficult tricks, such as flexible positions and getting thrown high in the air and turning, while her bases are waiting to catch her.

There is also a lot of gymnastics, and every choreography ends with a 30 second dance. Even though the sport does not go to the Olympics, every year the best teams from all around the world meet in Orlando, Florida and compete for the title of the strong