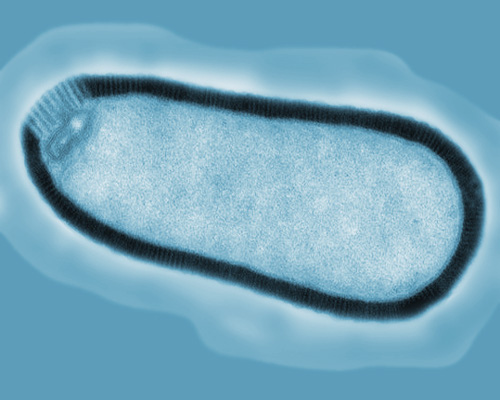 Technically, the virus was never dead, but then again, it was never alive either. Viruses fail to meet the characteristics of living organisms. Namely, they cannot reproduce on their own, process energy, or grow and develop. When a host is infected, it is forced to replicate the virus’ genetic material, which in turn infects more of the host’s cells.

A soil sample was used to infect Acanthamoeba castellanii (amoebas), which in turn were used to infect others of the same species. Signs of infestation became visible after approximately four to six hours. The sample’s complete lysis, or cell death, took 10-20 hours, after which time the sample was purified.

Pithovirus sibericum meaures 1.5 micrometers in length and is therefore the largest giant virus discovered to date. At first, it was suspected that the Pithovirus sibericum was related to the similarly large recently discovered Pandoraviruses. The latter were named as such because they opened a Pandora’s box of possible discoveries. When the Pithovirus’s DNA was sequenced, it was determined that it was, in fact, a different type of virus entirely.

Pithovirus contains double stranded DNA comprised of 64% Adenosine and Thymine base pairs and only 610,033 base pairs in total. It also has a large number of non-coding regions in its DNA. Pandoravirus DNA, on the other hand, is comprised of over 61% Guanine and Cytosine 2.8 mega base pairs, which translates to 2.8 million base pairs. This discovery demonstrates the diversity of viruses which remain to be located and sequenced.

Luckily, Sleeping Cootie won’t infect humans or even animals; her true love is the amoeba. This is not to say that this discovery is free of implications for humanity. While this specific virus will not wipe out the human race, its survival proves that other viruses trapped in permafrost may also be resurrected.

Pestilence may yet rise due to the seemingly inevitable melting of glaciers and drilling for natural resources associated with global warming, as well as a competitive global market. Over the past century, the Arctic’s temperature saw a 3 degrees Celsius increase, causing a 7% decrease in the Northern Hemisphere’s permafrost. Viruses frozen for millennia are coming to a theatre near you…