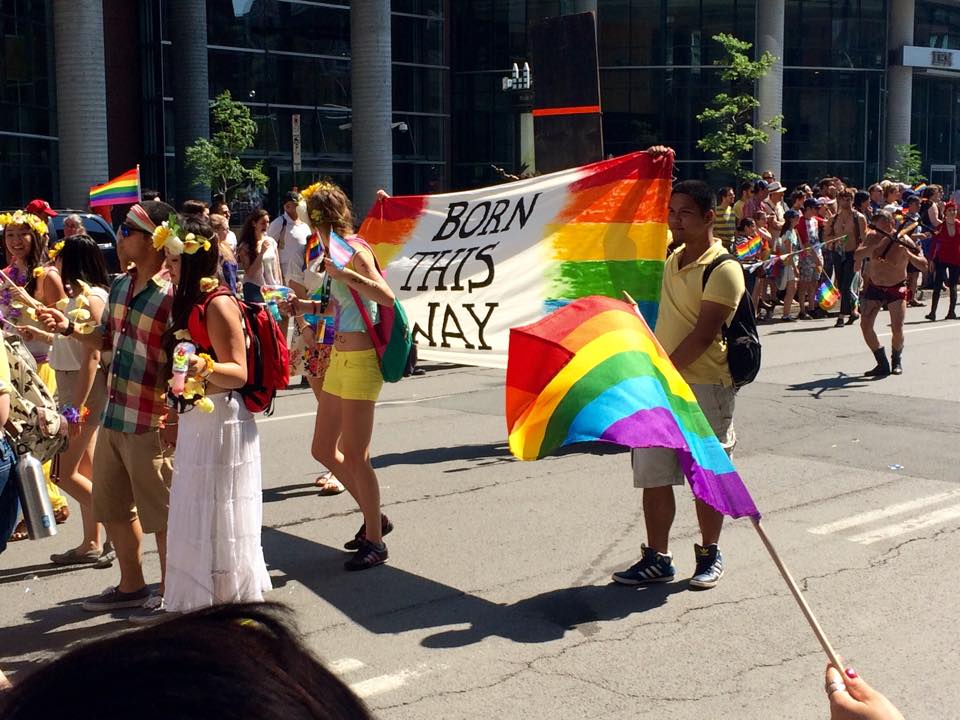 In my unbiased opinion, the recipe for a perfect day includes the following ingredients: a handful of fierce French drag queens, shirtless men covered in body glitter gyrating to pounding pop music, a sea of rainbow flags, the blistering heat of a mid-August day, and the sight of countless couples—regardless of gender—holding hands with pride.

Together with a couple of friends, I lived out my perfect day on August 16th, when the fabulously extravagant Pride Parade capped off Montreal’s annual weeklong Fierté festivities.

Fierté/Pride is a celebration of everything LGBTQ, with events ranging from theatre to sport, fashion to comedy, and literature to burlesque. It’s a time where, more than merely celebrating sexual diversity, there’s an overall theme of acceptance.

The parade followed a route that began at Guy Street and culminated in Montreal’s famous Gay Village. A colourful smorgasbord to say the least, there were representatives from practically every walk of life present at the event, both in the parade and cheering from the sidelines.

Countless businesses walked the route in support of their LGBTQ customers and employees, with huge showings from several national banks and pharmaceutical companies; the event, with a wry appropriateness, was sponsored by Viagra.

Hopefuls for the position of Prime Minister were present, including Liberal candidate Justin Trudeau, who stopped to take pictures with many spectators, and NDP candidate Tom Mulcair, who wore a rainbow lei and waved from his float. Stephen Harper was notably absent from the festivities.

My personal favourite moment of the parade was the black pickup truck covered in cutouts of a certain iconic set of lips that preceded the cast of Montreal’s Rocky Horror Picture Show Halloween Ball. The costumed performers danced the “Time Warp” and promoted their showing of the cult-classic film, which will again be taking place this Halloween at the Cinéma Impérial.

It was truly inspiring to see the number of families present at the event, with children of all ages waving their flags excitedly as their parents explained diversity and goodnaturedly covered their children’s eyes when the more risqué groups walked past.

As the parade concluded from where I was standing, the blaring music suddenly cut out and a sea of marchers stopped in their tracks with fists raised solemnly in the air. A deeply emotional moment of silence was observed for the victims of HIV and homophobia, which culminated with a chorus of joyful cheers that raced the length of the parade route.

My friends and I made our way to the Village, where there was a scene of pure happiness as thousands of people—gay, bi, trans, straight or otherwise—celebrated in the streets, embraced old friends, ate, drank, danced and simply existed without shame or judgment. Sitting on a curb at the north end of the Village, listening to the mellow music of a street performer, we just sat back and watched.

My perfect day ended on a hopeful note. The world has a long, long way to go in terms of accepting people as they are—the LGBTQ community still faces tremendous adversity— but seeing such a diverse Montreal community come together and celebrate makes me, perhaps naively, optimistic.

For the time being, all I know is that I’m proud of the person I am, and I was moved beyond words to see so many people proud of themselves too.

18 thoughts on “Out and About, Loud and Proud”