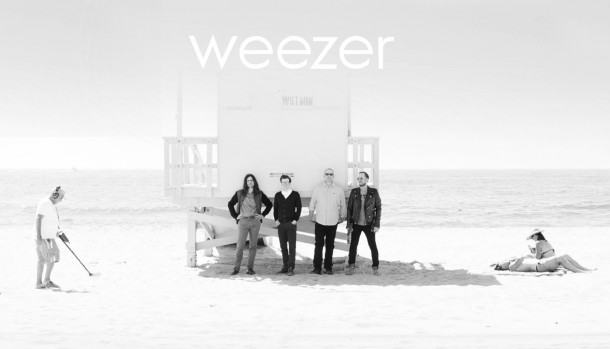 The hype for Weezer’s White Album has been absolutely palpable in the last few weeks. The venerated alternative rock band’s rise and fall has made for a provocative and interesting narrative, and many were hoping that The White Album would signal a return to stardom for frontman Rivers Cuomo and Co.
Unfortunately, The White Album isn’t quite that good – don’t get me wrong, a couple of the songs are downright legendary (“Do You Wanna Get High?” springs immediately to mind), but others are slightly reminiscent of Weezer’s much-loathed Raditude (even the name makes me cringe). Despite that unseemly comparison, The White Album is still able to hold its own. Weezer has the California-Pop-Rock formula down to a science now, and while formulaic is not the most flattering word, it is perhaps the best to describe The White Album.

Before its release on April 1st, The White Album was preceded with several singles dropped in the months before the album’s release date. “Thank God for Girls” garnered a lot of excitement, and despite early negative comments, it has quickly become considered one of the best tracks off the album. Rivers Cuomo’s high energy, punching vocals; the crunchy, aggressive guitar, the piano… all of it combined makes something that just screams “Weezer”!

Piano features incredibly prominently on several of the tracks on this record – and while this isn’t exactly a new thing for Weezer, it is definitely refreshing. It breaks up the heavy chords and riffs of the guitars, and helps add some depth to the sunshine-y California-pop inspired tracks. The inclusion of the piano as a primary instrument is something that, I think, improved the album to an incredible degree, and signals a willingness to continue to experiment on Weezer’s end.

Lyrically, The White Album leaves a lot to be desired. The track “L.A Girlz” comes with a heavy dose of irony, and “Thank God for Girls” has some really interesting dark religious undertones – but compared to the angsty poetry that you’d find on Pinkerton or The Blue Album, the lyrics just seem to fall flat in terms of meaning. They might make for really catchy songs, but nothing can quite recapture the anthemic choruses “El Scorcho” or tug on your heartstrings the way “Butterfly” did.

With all that said, this is without a doubt Weezer’s most solid album to come out in the last ten years. Rivers seems to have returned to form, and when he’s performing, so is the rest of the band. While The White Album may not be the most dramatic or impressive ‘comeback’ record, it is a comeback nonetheless. There’s not a song on this album I want to skip (except maybe “Wind in Our Sail”), and either way I’m definitely going to be blasting The White Album on repeat for a while. It goes without saying that it might be unreasonable to expect something as mythically fantastic as Pinkerton, but this record gives me a little bit of hope that we might eventually see it again.