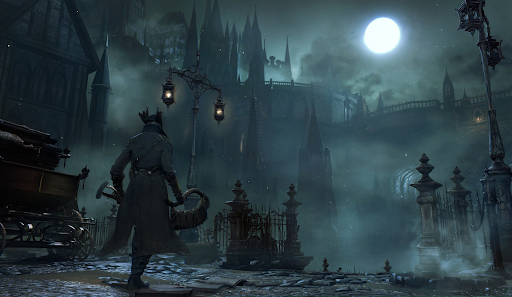 As an avid fan of Metroidvanias and difficult fantasy games in general, it always astounded both my friends and myself that I was never a fan of Dark Souls. The world was large and free to explore, the customization options were vast, the combat was fluid and responsive, but it never seemed to click with me regardless of how many times I tried. I was automatically drawn to tanky shield builds and long-range sorcerers and wasn’t accustomed to rolling or parrying, so battles drew out and evolved into more of a test of the game’s engine than its mechanics.

That all changed when I tried Bloodborne. The fact that there’s only technically a shield (it’s a joke that’s only found beyond two bosses) and that the class customization is more streamlined seemed to be what finally made it click. The game also replaces said shield with a gun used for parrying and tweaks combat in general so it’s faster paced, giving you the chance to regain life recently lost by hitting the enemy back.

At first I was drawn by its distance to Dark Souls; Bloodborne is set in a decaying pre-industrial society (aesthetically comparable to a gothic London) as opposed to a dirty medieval world, and this concept is explored to its fullest potential. Every new location seems to have been ripped right out of a concept art book and the corner of a street can just as easily lead into the alleyway you started with or the grandiose arena in which you fight that area’s boss. It’s a feat from the artists at FromSoftware that something as initially mundane as a bridge or a graveyard can be as memorable as they are. Even the soundtrack has tracks that differ from boss to boss and are as memorable and as equally praise-worthy as the visual art.

What eventually hooked me was its combat mechanics. The lack of shields or magic forced me to learn how to dodge and parry at the right times, and that led to learning how to manage my stamina properly. With the right tools at hand, Bloodborne is an absolute joy to go through. The game keeps throwing curveballs to make sure you’re always on your feet, and when regular enemies hit you it always feels deserved. Part of what makes the game work when it’s so intent on killing you is the fact that every time you die, you know that it’s on you and exactly why it happened. Knowing enemies could kill you in a few hits or ambush you if you’re not paying attention yet still managing to kill them instead gives off a sense of catharsis that’s rarely present in other games.

This aspect of Bloodborne (and Souls-like games in general) is made even stronger by its many bosses. Dark Souls bosses are known to be unforgiving and unrelenting, Bloodborne being no different. Every boss is first a puzzle to solve, then a test of the game’s mechanics. Every boss demands something different from the player and makes sure to surprise them as its health bar drops, ensuring that every boss fight is the grueling fight to the death that it’s meant to be. It also ensures that players are almost guaranteed to die repeatedly at boss fights, which (combined with the size of its sprawling maps) makes the game take even longer to beat.

Not wishing to spoil any of its surprises, it suffices to say that Bloodborne never lets up. It never takes its foot off the gas and instead ramps up near the end, making the bosses you fought at the beginning seem like innocent distant memories. Right before the grimy streets of Yharnam would start getting boring or normal, more areas open up to make sure you’re not feeling safe anytime soon. The enemies and bosses of each area are each markedly different, lengthening the game not by adding more of everything, but by keeping you uneasy without keeping you in the same state or same situations.

Bloodborne is an incredible game by any margin and is responsible for me finally getting into Souls-like games. Now that I know how a Souls-like is meant to be played, the other games in the series are immediately more enjoyable. However, even now that I’ve played other titles, Bloodborne is still my favourite. Its sense of style, music, and fast-paced combat simply can’t be found anywhere else.