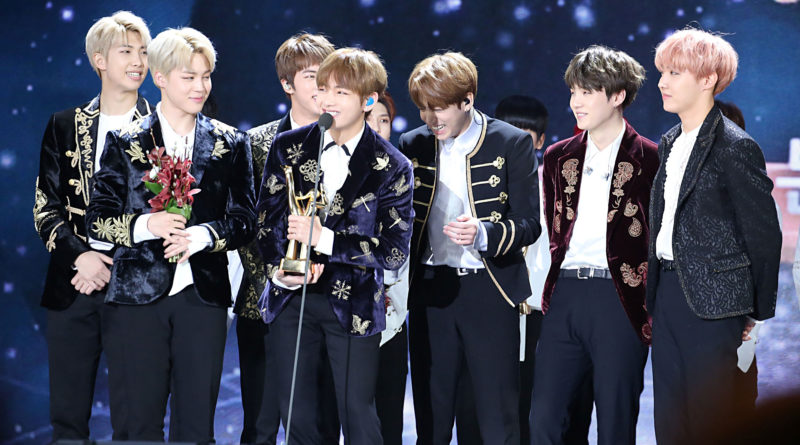 By the Youth and for the Youth

We are in a constant search for meaning and purpose in our lives, and we sometimes face identity crises. We also tend to relate and get attached to what speaks to us. For some, this attachment is BTS, the Bulletproof Boy Scouts. This K-pop group consisting of RM, Suga, J-Hope, Jimin, V, Jin, and Jungkook debuted on June 12, 2013 and released four studio albums, four Compilation albums, five Extended Plays and more than twenty singles. However, we are not here to discuss quantity, rather to give a brief introduction to their quality. Last year, the members of BTS were the first artists to break Justin Bieber’s winning streak at the Billboard Music Awards for Top Social Artist and the first Korean boy band to perform at the American Music Awards. Here, you may ask,
what is so special about this septet? Well, if this was a tweet, your feed will be bombarded by replies from their endlessly dedicated fanbase, the ‘ARMY’. However, if you picked up this paper, you
were looking for a non-virtual answer and I will do my best to deliver a worthy one.

Behind all the colorful outfits and cool dance moves exist heartfelt messages. Youtuber “ClickForTaz” called them a “movement” and she perhaps found the right word. In a successful and advanced country like South Korea, where suicide rates are one of the highest in the world and where mental health is sometimes disregarded, the youth is at risk. Thus, through their lyrics,
BTS doesn’t go for the loveydovey songs targeting their female fans, as one may expect from a seven-member boy group. Contrarily, the members try to reach out for a bigger audience, and sometimes even older, by diffusing political and social issues in their music.

Their “school trilogy”, consisting of the albums “2 Cool 4 Skool”, “O!RUL8,2?” (acronym for Oh! Are you late too?) and
“Skool Love Affair”, touches upon “the troubles and anxieties of school-age youth”. Specifically, their title songs “N.O” and “No More Dream” speak up against the youth becoming like study
machines and that they forget their own dreams and ambitions. They continue on with a series called “the Youth series” with the following albums: “The Most Beautiful Moment in Life, Part 1”,
“The Most Beautiful Moment in Life, Part 2”, “The Most Beautiful Moment in Life: Young Forever”, “Wings” and “You Never Walk Alone”. This time, they touch on themes such as mental health issues, suicide and female empowerment. The key point in their songs is that the themes are not always as explicit, and fans deliver theories and analysis in order to grasp the meanings of
the group’s songs. A song worth mentioning is “Spring Day” from “You Never Walk Alone” that tackles the themes of regeneration and moving on. Specifically, it is a “conclusion to the series; a
moment of closure and reprieve before the group continues onward”. It has an interesting take as its music video delivers its message by referring to the story by Ursula K. Le Guin, “The Ones
Who Walk Away from Omelas”. Finally, they began the “Love Yourself ” series alongside their campaign with UNICEF that holds the same name. The first EP “Love Yourself: Her” explores
friendship, love, death and the nihilistic attitude of the youth.

“Within different languages, you have different languages, but I think we can all share the same message. I think that’s why our songs appeal to people who speak Korean and to people who don’t speak Korean”, said Suga, the lead rapper, during the group’s appearance on the Ellen DeGeneres Show. Perhaps, at the end, what speaks to us isn’t stopped by language barriers and cultural differences because, as humans, we all speak the same language, whether it is pain, joy, or envy.