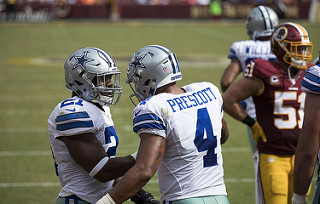 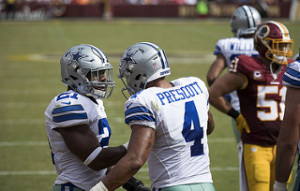 This past offseason all 4 teams made big moves. The Eagles drafted quarterback Carson Wentz 2nd overall. The Cowboys drafted running back Ezekiel Elliott 4th overall. The Redskins brought in cornerback Josh Norman and the Giants spent over $200 million on their defense. It was no surprise that the NFC East would be more competitive this year, but no one could have predicted that every team would be over 0.500. Going into Sunday Night Football, the Dallas Cowboys held first place with a record of 5-1, followed by the Eagles (4-2), Giants (4-3) and the Redskins (4-3-1). The Cowboys hosted the Eagles on the Sunday night in what was sure to be a high intensity game.

The Eagles’ first possession was nothing special and they were forced to punt, but the Cowboys were called for too many men, giving the Eagles the first down. They got on the scoreboard first with a field goal to make it 3-0. However, the Cowboys came right back. Dez Bryant returned from injury, looking like his old self, with a 53 yard catch, before rookie quarterback Dak Prescott rushed for the touchdown. The Cowboys also increased their lead with a field goal on their next possession. The Eagles’ running back Ryan Mathews tied the game at 10-10 after starting their drive on Dallas’ 45 yard line. Inside the two-minute warning, the Cowboys were in the red zone on a 2nd and Goal when Philadelphia’s Jordan Hicks intercepted the ball. Caleb Sturgis connected on the 55 yard field goal, giving the Eagles the 13-10 lead going into the half.

The Eagles further extended their lead to 20-10 after another touchdown. The Cowboys got the ball back but found themselves in a hole and lined up to punt on 4th and 8, but Chris Jones faked it and picked up 30 yards on the ground. Prescott drove the Cowboys down the field before they settled for a field goal. The Eagles scored another field goal, but then fumbled the football on their next possession, giving the Cowboys the ball on the Eagles’ 36 yard line. The Cowboys couldn’t do anything and they settled for the field goal making it 23-16. However, on their next possession, they went 90 yards down field before Bryant’s second touchdown of the game made it 23-23 and sent the game into overtime! Jason Witten would go down as the hero with the game winning touchdown. The Cowboys now have a 2 game lead in the NFC East.