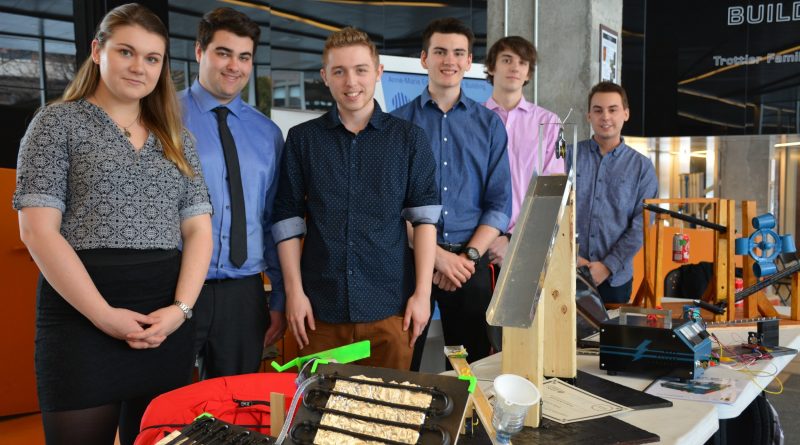 If you’ve ever walked through the Penfield basement, you might have run into students from the Engineering Technologies program, which places an emphasis on the more applied side of science. From electronics and pneumatics to optoelectronics and thermodynamics, students are taught how to use their acquired knowledge to create something of their own design. While the first and second years have their own small projects, a main staple of the program is the third year Project 1 and 2 classes. These classes have students showcase everything they learned in the first four semesters in a unique project that they must design, build, troubleshoot, and finance by themselves. Some of the past projects include: an automatic cocktail pourer, a 3D-printed remote controlled car, and a custom DJ console.
That’s where the EngTech Student EXPO comes in. It is the students’ annual chance to showcase their best work to their colleagues in other programs. Some of these projects show true ingenuity and are greatly inspired by the students’ personal passions and hobbies. This year is no exception. Multiple projects demonstrate how simple machines such as pulleys, levers, and gears can be used to accomplish work of almost any kind. From a small crane that is able to lift many times its own weight, to a miniature recreation of one of Leonardo Da Vinci’s war machines, the second years will provide an impressive display to all visitors.
One of the more ambitious projects you might see this year are Ryan Campbell’s flight simulator controllers. A pilot himself, with a passion for aircrafts, he built controllers, similar to those on some aircrafts that are fully compatible with flight simulators. While most of its structure is made out of aluminum and steel, the controllers include thirteen separate 3D-printed pieces which were entirely designed by Ryan. Another student, Anastasia Fertikh, built an aquaponic system with a fish bowl and a pump that allows fish and plants to live symbiotically. She built it as a way to test an innovative farming design that is currently being used in northern regions at a large scale, which she claims allows plants to grow 33% faster.
Lastly, Danny Boulet made a full size arcade that is able to emulate not only old arcade games, but also retro consoles like the SNES and the Atari 2600. Running entirely on a Raspberry Pi, he made the whole case and the internal wiring by himself. The project truly captures a retro gaming feel that is bound to make an impression among attendees (and allow them to have fun while trying it out). These are just some of the projects you might see at this year’s EXPO. If you’re interested in checking out the various others that’ll be present, the event will be taking place on February 21st from 10:30 am to 2:30 pm on AME’s main floor. You won’t want to miss this!