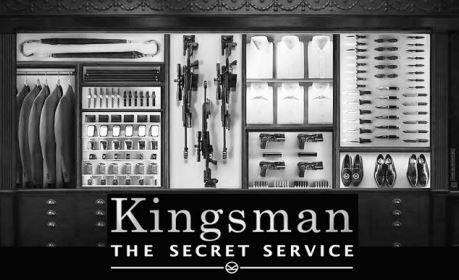 Kingsman: The Secret Service, starring Taron Egerton, Colin Firth, and Samuel L. Jackson, is a new movie by Matthew Vaughn, who directed the Kick-Ass movies as well as X-Men: Days of Future Past. The narrative follows Gary “Eggsy” Unwin’s recruitment and training for one of the few positions in the elite Kingsman Secret Service. At the same time, Kingsman will be attempting to take down the billionaire-madman, Richmond Valentine, who seeks to rid the world of the plague known as humanity, killing all but a select few people.

So far this year, Kingsman is the best movie to have come out, in my opinion. It holds a perfect blend of action, comedy, and British accents fit for anyone who can stomach mass homicide. Taron Egerton is perfect in the role of Eggsy, full of wit, snark, and handsome good looks. His performance throughout the movie is on point and should bring him many bigger roles in the future. Most people don’t usually think of Colin Firth as an action hero, especially after movies like Magic in the Moonlight and Mamma Mia, however his role as the dangerously gentlemanly Gallahad works perfectly. It’s impressive that Firth apparently did all of his own stunts, save a few involving cranes. Samuel L. Jackson, as always, did a wonderful job. His character is a great homage to the old James Bond movies with physical deformities (in this case, Valentine’s lisp). The dialogue in the movie is hilarious and makes you wish for a British accent by the end.

Speaking of homages to the old James Bond movies, this is practically what this entire movie is. From the plethora of hidden gadgets like signet ring-tasers to poison-tipped blades hidden within shoes to cheesy catchphrases, this movie reeks of 007, but in a good way. Even though we have seen British spy film homages, parodies, and the like many, many times before, Kingsman takes a newer, gorier, and more hilarious approach. Yes, that’s right, I said gory. This movie deserves its R rating with the Tarentino-esque amount of stabbing, slicing, shooting, kicking, punching, and impaling going on, with the inclusion of a mountain of swearing. The action sequences of this movie are brilliantly choreographed and impressively shot. Just take the church scene, for example, which lasts approximately five minutes and is practically one long continuous shot.

Overall, this movie is amazingly well written, acted, and directed, deserving an immense amount of praise and love. I give this movie 10/10…maybe 9.5/10 on a bad day. Just don’t bring