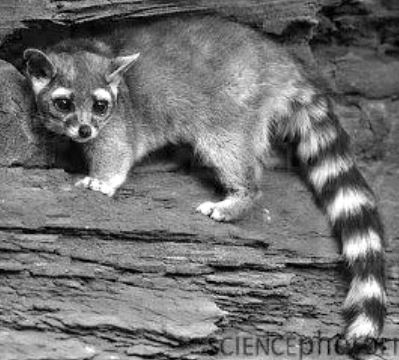 This nomadic species can be found in the southwest American region and in most areas of Mexico. Also known as the Bassariscus Astutus, this animal has a seasonal dieting habit. This means that most of the time, it will eat what is available during that period. Therefore, it can eat a wide range of food.

Their biggest predators are great horned owls, bobcats, racoons, and coyotes. These hunters get their common name, Ringtailed Cat, because of their tails which have seven to eight black rings.

What most people must understand is that, regardless of its name, it does not have any relation to cats. Instead related to racoons, the Bassariscus Astutus can measure between 24 and 32 inches (without the tail). Their tails add twelve to seventeen inches to their sizes and they can weigh from 0.7 to 1.5 kg.

An interesting fact about this species is that they make multiple sounds which include squeaks, metallic chirps, whimpers, chitters, chucking, hisses, grunts, growls, and ululations. Also, they are mostly nocturnal animals, which means their bodies have developed an aversion to light. Their mating time is between February and May