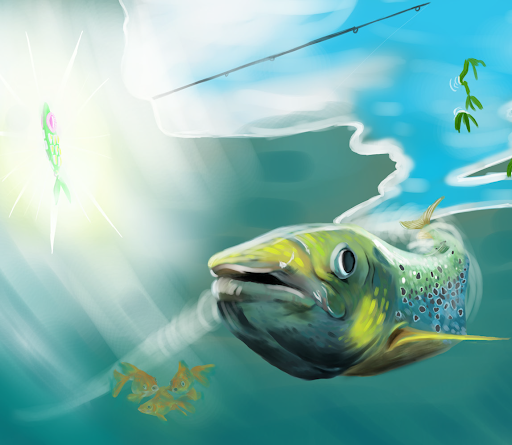 In the dark depths of the sea there strolled three little fish with old and wise minds. Amongst them followed a big, young, and valiant salmon with not much more knowledge than a blank book.

While they were going about their day the most marvelous thing happened. They witnessed the light of Poseidon. The light was carried by one of His messengers, a tiny, agile, and colourful fish.

“It is said that they come to retrieve the courageous fish in the sea only to reward them with what they deserve”, explained one of the wise fish excitedly.

“And what would that be?”, asked the salmon. The three wise fish shared eye-contact and agreed on their silent conversation.

The salmon questioned no more for he was one tiny mind and they were three larger ones. Out the salmon went to expose his gallant personality to Poseidon. Up he went towards the light where he would receive what an uncritical and brave fish deserves, to be gutted in a sea of blood in the hands of the ancient god we call Poseidon.