Zika No Longer Only South American

The Zika virus is becoming widely known in the Western world. It is travelling up the continent at alarming speeds, and while the symptoms may be mild, the complications are not.

Zika, which up until now has been relatively unknown and unnoticeable, has caused quite a lot of concern in the countries of Central and Latin America. Even though only 1 in 5 people infected with Zika display symptoms and those symptoms only last 7 days, recent studies have begun linking Zika and fever with Guillain-Barré Syndrome and microcephaly.

Transmitted primarily though mosquitoes, Zika has started to spread at an astounding rate into Latin America and the Carribean. Zika causes fever which can result in developing a rash, mild headaches and joint pain (CDC). It has only recently been proven to be transmittable through sexual activity, and it is capable of mother-to-child transmission (CDC). 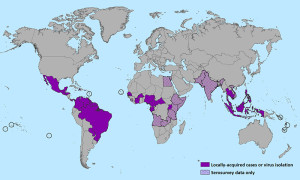 Major concerns include potential links between Zika and birth defects, such as microcephaly, and a possible, if tenuous, connection to Guillain-Barré Syndrome. Guillain-Barré Syndrome is incredibly rare, afflicting approximately 1 in 100,000 people that severely and suddenly weakens the muscles in a person’s body.

The link between Zika and microcephaly (a neurodevelopmental disorder, usually manifested physically in the form of a reduced head/skull size) is strongly suspected, but yet to be proven, according to the World Health Organization.

Reports indicate that there are more than 3,100 pregnant women in Latin America infected with the virus, and that the number is expected to rise.