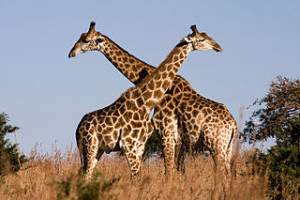 Even More (or Less) Giraffes

Giraffes aren’t quite as simple as we’d like to think.
Recent DNA analysis of giraffes across Africa have resulted in a revelation- giraffes aren’t just one species. They’re four. (That’s FOUR TIMES as many giraffes!!)
Dr. Axel Janke and Dr. Julian Fenessy spent 5 years analyzing the mitochondrial DNA of giraffes. What started out as an attempt to understand a possible difference between northern and southern giraffe populations became a study that sampled all the major giraffe populations across Africa.
As it turns out, there’s more genetic difference between two species of giraffes than there is between a polar bear and a brown bear. Dr. Janke stated that he’d rarely seen such genetic variation within a species.
The differences between the species seem to be mostly morphological. The patterns of splotches and the ossicones atop their heads are the most obvious way to differentiate between any of the four species of giraffe.
In light of this study, some species of giraffe have become some of the most endangered mammals in the world. There are only an estimated 4750 reticulated giraffes in the wild, for example. Conservation efforts are already in place to attempt to retain the populations of these creatures.