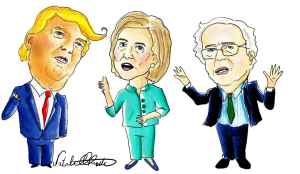 The Dangers of Splitting the Presidential Vote

With the American presidential elections less than 2 two months away, Americanscitizens have to quickly decide who they want as President for the next 4 years. However, many voters feel disenfranchised by the Republican and Democratic parties and are searching for a third option.

Numerous Americans do not trust Hillary Clinton since she has been at the center of several scandals. Recently someone hacked the DNC’s (Democratic National Committee) email account which revealed that the DNC, who is supposed to remain neutral prior to electing a presidential candidate, had favoured Clinton defeating Bernie Sanders. This scandal led to the “Bernie or Bust” movement in which several democratic voters vowed to either vote for Bernie Sanders or for no one at all. Unfortunately, this has caused a divide within the Democratic Party. Sanders, who is well aware of the dangers created by a Trump presidency, is urging his supporters to vote for Hillary in order to avoid splitting the vote since this would only benefit Trump.

In order to avoid a Trump presidency, the American public must not vote for a third party. If they decide to vote for another candidate, then the vote will be split between 3 parties in what is known as the “spoiler effect”. The spoiler effect occurs when a voter votes for a minor party, effectively taking votes away from the major parties. It can heavily alter election outcomes as seen in the 2000 American presidential elections of George. W. Bush VS Al Gore. During these elections, the winner of the elections came down to the state of Florida in which Al Gore lost to Bush by 537 votes. Several people believe that Gore lost due to the spoiler effect caused by liberal candidate Ralph Nader. In Florida, Nader received over 97,000 votes, more than enough to cause a Bush win. In addition, when Nader supporters were later asked who they would have voted for had Nader not ran for president, 45% said that they would have voted for Gore, compared to the 27% who said they would have voted for Bush, while the remainder said they would not have voted.

Currently this effect can be seen by Green Party candidate Jill Stein who is polling at about 2% nationally (accurate as of 6/09/2016) . While 2% may not seem like a lot, Hillary is currently trailing Trump by 1% in the national polls (accurate as of 6/09/2016, CNN). If this tight margin were to continue until voting day, it is very likely that Hillary could lose to Trump because of Jill Stein supporters. Similarly, Libertarian candidate Gary Johnson is polling nationally at 9% (accurate of 6/09/2016, CNN); thus, Trump could lose to Johnson supporters.

For the upcoming elections, it is important that the American public do not split the presidential vote by voting for a third party candidate. Though many American voters may not like Hillary Clinton, voting for another candidate who has no chance of winning will only benefit a Trump presidency, one which is sure to bring sentiments of anti-immigration and islamophobia to the US.