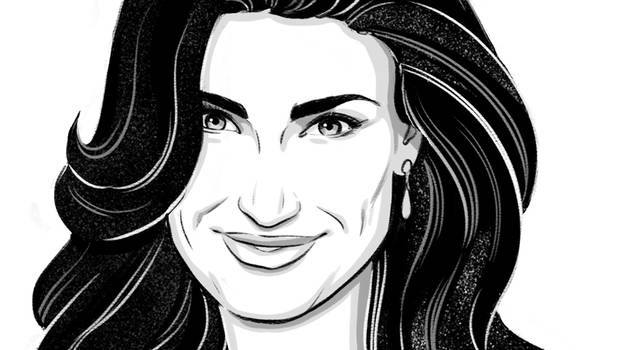 Any self-respecting musical theatre fan will no doubt swoon at the very mention of the name Idina Menzel. For the average person, she is better known as “that Wicked chick” or “Elsa from Frozen”. Still, Montrealers came out in droves when the reigning queen of Broadway swooped into Place des Arts for the penultimate stop on her world tour.

Clad in a tasteful and almost unassuming black and gold dress, Menzel took to the stage a mere 20 minutes late (given the diva-like tardiness of many others in her field) to a standing ovation as she opened the show with the Stephen Sondheim hit “Defying Gravity”. The song, a powerful finale to the first act of Wicked, was made famous by Menzel in her Tony-winning role as the Wicked Witch of the West, Elphaba. Culminating in her signature belt, the number received the second of countless standing O’s that night.

The show continued with a perfectly balanced combination of musical theatre staples, including songs Menzel performed in her Tony-nominated roles in Rent and If/Then, as well as several covers. A highlight was her tortured rendition of Radiohead’s “Creep”, as well as a tribute to late Rent composer Jonathan Larson.

Throughout the show, a barefooted Menzel engaged in playful banter that was surprisingly genuine. At one point, she donned a pair of fuzzy green slippers and made her way into the audience to pick several spectators to join her in the spunky Rent duet “Take Me or Leave Me”—that number was certainly stolen by a very self-assured young girl named Clara.

Toward the end of the evening, Menzel set down her microphone and thanked the audience with an acapella version of the stirring Wicked friendship anthem “For Good”; in a feat that proved her technical prowess, Menzel’s voice carried totally unassisted throughout the enormous room.

Certainly the most popular song in her repertoire, Menzel saved Oscar-winning “Let It Go” for the end of her set. The song must have lasted at least ten minutes, as Menzel invited a chorus of beaming girls to join her onstage and also lead the audience in a sing-along.

The cheers and applause following her departure from the stage prompted an encore that included an original piece called “Child”—an ode to her son with ex-husband and Rent costar Taye Diggs—and “Tomorrow” from Annie.
For longtime fans, it was a chance to see a true musical theatre icon (and personal role model) sing the songs that have defined the past two decades of Broadway music. For those who knew her only as Rachel’s mom on Glee, or else as the voice frequently belting a Disney song on the radio, they were treated to an evening of beautiful music.

If anything, Idina Menzel proved that she’s earned her reputation and the only question is, what will she do next?