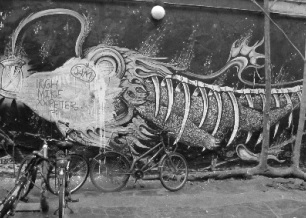 Most of the world may grumble about graffiti, but has anyone ever considered the link between this art form and respect? This statement may seem a little backwards. It only dawned on me during a trip to Europe with my high school English class.

The day we landed in Berlin was a whirlwind of activity. Jet lag was hitting a few of us very hard, myself included. In an effort to keep the sleepy students awake and engaged, the tour guide, Charles, decided to take us out of the tourist area and bring us to a local hang-out. We trudged lethargically down an alley way. We all perked up a bit at the sight of all the colorful graffiti covering every available surface even on an entire stair well covered floor to ceiling in artwork. In small groups we stopped here and there to gaze upon the beautifully colored walls. There were all sorts of styles and subjects represented on this unconventional canvas. What was really astounding was how they could blend, meld, and co-exist together so well despite their drastic differences. That’s when the relationship with respect started forming in my mind.

The artists who put their work up on this wall recognized the effort and contributions of their fellow artists. They may have opposing artistic stand -points, but they respected the other works and blended their own creation so the edges of each piece exist in harmony. Where there is respect, disrespect is sure to follow closely behind. Some artists do not conform to the respectful blending of the different graffiti pieces. They instead go over top of, tag, or even vandalize the work of others. It is a disheartening thing to see, a beautiful piece tampered with because someone felt it wasn’t good enough or were jealous that they could not produce something as spectacular.

Graffiti artists not only demonstrate respect for fellow artists and their creations, but also for the places in which they display their creations. The alley is a place where the graffiti is considered a good thing, and the artists show their appreciation for it by creating such elaborate time consuming works of art. The Berlin wall also supports this notion because the artists who worked on it respected the significance of the wall and used it to make a statement about their views of what was happening on the other side of the wall. The Berlin wall wouldn’t be as notorious as it is today if not for this expression of feeling through art. Having seen it myself, I can attest to the thought-invoking images and diverse perceptions depicted, respecting the gravity and scrutiny their work would be under.

The tagging of various public infrastructure is in no way respectful, no matter how well the image is represented. To create successful and meaningful graffiti, it must be in the right place sending the right message. Respect yourself, your surroundings, and others. It’s a powerful, age old lesson to be learned outlined distinctly in a contemporary art form. So the next time you see a bridge with ugly brightly colored letters adorning it, direct your scornful thoughts to the individual and not the art form because graffiti can be very respectful and gorgeous when you see how professionals do it. It can make a statement not just by what image has been created but by where it’s placed and how it blends with the surroundings. I know quite a few average Joe’s who could learn a lesson about respect from the graffiti artists of Berlin.